How long could you hide from the Police? 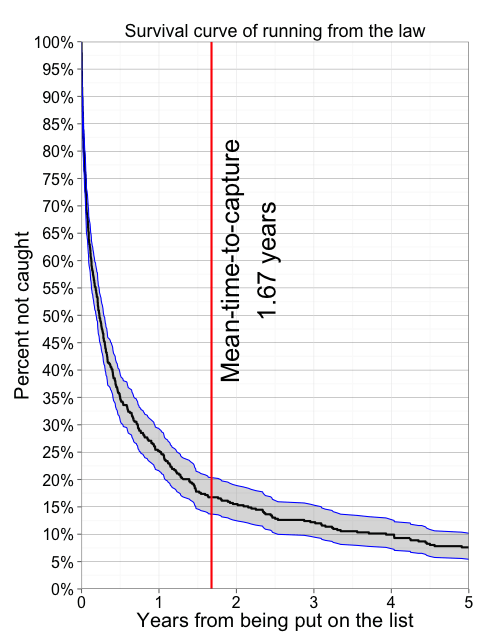 Perhaps you, like us, have often pondered, “How long could you hide from the police?”

Christopher Peters, a data scientist, set out to find out by accumulating information on the 500 felons who have been on the FBI’s Most Wanted Fugitives List since 1950. He worked out how long each perpetrator had been on the list before being apprehended (though some have yet to be seen).

The following stage was to figure out how long the typical fugitive had been on the run. Peters, on the other hand, couldn’t merely take the average. The issue was that there were still criminals roaming the streets. If he leaves them out of the data set, the research question becomes “How long could you hide from the police?” That, however, is not the question we’re posing.

To get around this, Peters tried to figure out how long these still-wanted criminals could hope to go unnoticed. He employed a statistical technique known as survival analysis (often used in medical research). This method could be used to determine how long fugitives who haven’t been apprehended should expect to be on the run.

After conducting this research, Peters discovered that the typical fugitive on the Most Wanted List spends around 1.67 years on the run:

As you can see, a fugitive’s odds of being apprehended are slim. Only 25% of all wanted criminals had not been apprehended within a year after being added to the list. Only about ten percent of fugitives managed to stay free for five years. Bin Laden was theoretically on the run for more than a decade, but he had the luxury of hiding in carefully guarded tunnels and facilities. However, once criminals are placed on the Most Wanted List, law enforcement generally performs a good job of apprehending them.

Let’s pretend you’re on the run from the law. What is the best long-term approach for eluding the cops? Do you believe you could escape being apprehended for a longer period of time than the average?

Ignore everyone you know, including family members. As a cop, I begin with your residence, then your parents’ residence, your girlfriend’s residence, and all of your friends’ residences. Each person I meet gives me fresh ideas for places you might visit.

Don’t bother going to any sites you’ve already visited. If you go to Atlantic City to gamble on occasion, the police will be aware of this and will alert the local police to be on the lookout for you.

Taking public transit is only a smart option if you can flee before the crime is uncovered. A faxed or e-mailed copy of your photo will be available at bus terminals, train stations, and airports. Everywhere you look, there are video cameras.

Avoid cities; there are video cameras everywhere, and many of them utilize facial recognition technology.

Stay away from toll highways and bridges equipped with video cameras, tag readers, and other high-tech devices.

It will be easy to identify and monitor you if you travel in your automobile or the car of anyone linked with you. Without your driver’s license, which will be entered into the DMV computer under your name, you won’t be able to buy or rent a car.

Don’t use or even turn on your phone because the GPS will tell you where you are. Even if your phone is switched off, it can be enabled and tracked. Even burner phones are no longer anonymous. The same may be said for most GPS-equipped automobiles. Using only cash instead of credit cards will also reveal your location. Banks and ATMs are in the same boat.

Do not contact anyone, especially if a large reward is offered for information leading to your arrest.

You might be able to make it to the West Virginia hills, live off the grid, and assume a new identity, but it’s unlikely.

Perhaps you should contact a skilled lawyer and negotiate your surrender.